Agent Batflaps is a member of the TruthShrieker forums, which is an online community dedicated to paranormal investigation. He first appeared in Issue 9.

Agent Batflaps is very active in the online paranormal community. His videos are very popular, with people often liking them and leaving comments even though they have not watched his videos. He posted a video of himself becoming mind-controlled by a telepathic ghost potato, which is obviously fake as Dib can still see the strings holding the potato in the air.

While Dib is interning for Zim, one of his jobs is to go abduct a human specimen. Using the voot crusier, they abduct Agent Batflaps from his house while he is in the middle of recording another potato video. Agent Batflaps is then taken underground into Zim's Base, where he is stored in a containment tube.

It is not exactly clear how he escapes (he claims to have escaped by starving to death in Issue 14), but at the end of Issue 9 he is seen uploading another video. This time it is footage from inside of Zim's alien base. Despite the interesting sounding description, it is actually 2 hours of him videotaping his feet inside the containment tube.

Agent Batflaps appears again in Issue 14 once again criticizing Dib for his video, believing his evidence of various Sasquatches to be fake. But Gaz forces him to type a positive comment on Dib's video in an effort to keep Dib from being sad and exploding.

Agent Batflaps recording a video in his room 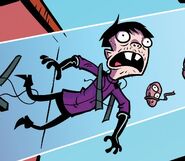 Agent Batflaps inside a containment tube

Agent Batflaps as he appears in Issue 14