Davey Gutzmann is a 2nd grader at Skool that won the Skool's talent show in Issue 10 of the Invader Zim comics.

Davey is a short, chubby child with trim cut black hair. He wears a white shirt with purple pants. He also carries a boa constrictor around with him he calls Commander Squeezers. Almost everybody is impressed by the snake, and Davey is awarded the trophy for the talent show, which angers Zim since having an animal is not a talent.

Zim decides to travel to Planet Sylvestra in an attempt to capture a creature far more ferocious than Davey's snake. The other Skoolchildren quickly abandon Davey and his snake when Zim returns to Earth with the Snarl Beast - while it's returned to its cat-like form by this point, its cuteness is still enough to capture the students' attention. 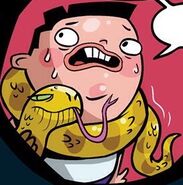