GIRT is an alternate future counterpart of the present GIR. GIRT was upgraded by future Zim (Emperor Zim) to serve him better than when he was known as GIR. Unlike the present GIR, GIRT seems to show little to no signs of hyperactivity or immaturity, listening to what Emperor Zim tells him to do and then actually doing it. However, the past GIR seems to be impressed with him. His first, (and only) appearance was in Issue 12.

Being upgraded by Emperor Zim, this future GIR now has three heads, and his body and limbs parts are now larger and more complicated then his present counterpart. Emperor Zim tells present Zim that he really doesn't know what the 'T' at the end stands for. He is more productive than GIR, as he seems to consistently complete the tasks that Emperor Zim demands from him. However, some there are some remnants of the past GIR, as he gets distracted by a baby just as past GIR would. 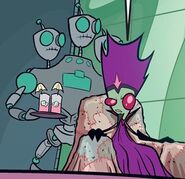 GIRT with his master, Emperor Zim.

GIRT (in duty mode) attempts to attack the present GIR. 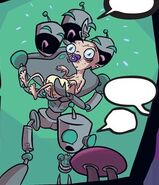 GIRT gets distracted by an aged baby GIR hands to him.
Community content is available under CC-BY-SA unless otherwise noted.
Advertisement