Those are some creepy flaming piggies!

These were bad piggies before Angry Birds!

Game Over for Gaz. 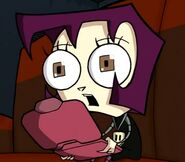 That’s a disturbing name for a gaming console.

Not a good idea to let Gaz leave the house with that...

Professor Membrane takes the bat away. Gaz is disappointed.

Dib lost in the parking garage of the mall. 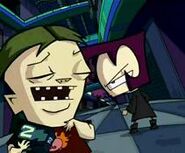 Iggins is a jerk, but Gaz needs to learn that it isn’t right to torture people who invoke her wrath...

Gaz looking creepy out in the pouring rain...

All this horror and drama over a Vampire Piggy game!?

Gaz has gone too far, breaking into Iggins’ house!

Iggins runs away frantically while holding his game.

Who has an emergency battery container??? Only Iggins...

Gaz with one eye popping out as she holds the batteries hostage!

The elevator or doom...

Gaz: “The rightful order has finally been restored.”

Gaz looking grouchy, as per usual.

Dib wanders past the busted elevator.

Retrieved from "https://zim.fandom.com/wiki/Game_Slave_2_Screenshots?oldid=91278"
Community content is available under CC-BY-SA unless otherwise noted.