"Gaz, Taster of Pork" is the 5th episode of the second season of Invader Zim. It first premiered on December 27, 2003 in Australia. In the United States, it was first released as part of the Horrible Holiday Cheer DVD on October 12, 2004 and it made its TV debut on Nicktoons on August 12, 2006. It is the 25th episode overall.

After the Mysterious Mysteries host explains to the viewers that Spelldrives are an electronic book which utilizes magic, he grudgingly says Dib has "the largest collection of these ancient sources of mystical knowledge" and does a brief but annoyed interview with him.

Nonetheless, Dib is happy to have appeared on his favorite show yet again and is even happier having realized that he still has unused cast points on it so he decides to use it. Dib comes across a spell that sounds interesting, but casts it on his sister, Gaz, first, in order to test and see if the spell is one he'd like to use on himself. However, the spell makes everything Gaz eats taste like pig.

Once Gaz figures out Dib is behind this, she threatens to destroy him with an army of flesh-eating robotic toys if he doesn't help her get back to normal. Dib has trouble finding a cure, so he talks to Professor Membrane. All their father does, though, is put Gaz inside a cage and has the media treat her like a freak. Dib even tries to ask Zim for help, but the latter mockingly refuses to aid him. Zim then goes on about planning his diabolical scheme, to which Dib didn't pay any attention while leaving.

Next, Dib goes off to ask the Swollen Eyeball Network if they have any advice on his situation. They report back that there is only one way for Gaz to get her sense of taste restored: she must travel to an alternate piggy dimension and ask the Shadowhog to return her to normal.

After helping his sister break out of the cage, Dib and Gaz travel to Mystical Hill while using one of Dib's Spelldrives to transport themselves into the realm of the Shadowhog. There, after much convincing, the Shadowhog agrees to cure Gaz, but only if she passes "The Trial". Gaz readily agrees to these terms, but Dib becomes concerned for his little sister, as she knows so little about the paranormal, and she must pass on her own.

In truth, once Gaz enters the arena where her trial takes place, the Shadowhog asks her two questions, both of which she answers correctly. Then they spend the rest of their time hanging out and talking. Meanwhile, Dib is outside the arena trying to break in and help Gaz as he's beaten up in the process.

When Dib finally makes it inside, he assumes Gaz failed and begs the Shadowhog to punish him instead, after confessing it was his fault Gaz was cursed. Both the Shadowhog and Gaz decide to do as he wishes. Soon, Gaz goes home back to normal, while Dib is stuck in the piggy dimension cleaning out the Shadowhog's toilet with his head. 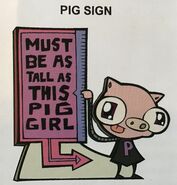