The humungoserum is an experimental formula created by Zim as part of his latest evil plan in Issue 13.

As Zim explains to GIR, a drop of the humungoserum can transform anything into a giant monster, which he demonstrates on a bug, before destroying it. He then goes off to his "scheming nook" to figure out how to use the humungoserum against the humans, having apparently not done so beforehand. It is at this point that Dib, having learned of the humungoserum by spying on Zim, steals it as proof of Zim's plans. He succeeds, but upon escaping from Zim's Base, is kidnapped by a pair of aliens, and swallows the vial containing the humungoserum to hide it.

These aliens have also somehow learned of the humungoserum, and intend to use it to open a giant puppy shop on Planet Poochaloo. And because they think Dib is Zim's best friend, they kidnap and torture him to try and make Zim surrender the humungoserum; however, since Zim and Dib hate each other, Zim merely takes enjoyment out of it.

This lasts until Dib reveals that he swallowed the vial. Shortly after, it breaks, exposing him to all of the humungoserum, turning him into a monster. Humungodib subsequently goes on a rampage, destroying the aliens' ship and crashing back to Earth. Zim then declares that all the humungoserum is now used up. 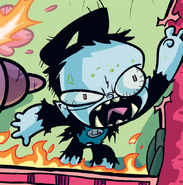 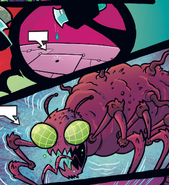 Zim turning a flea into a humungoflea
Add a photo to this gallery
Retrieved from "https://zim.fandom.com/wiki/Humungoserum?oldid=76116"
Community content is available under CC-BY-SA unless otherwise noted.