Invader Skoodge is among the shortest Irken Invaders, but possibly the most competent since not only was he the first one to finish his mission during Operation Impending Doom II but also survived the Slaughtering Rat People of Blorch.

However, despite his success as an Invader, Skoodge is scorned by the Tallest for being "so short and ugly", most likely because his success proved that height has no effect on an Invader's competence.

Skoodge is a very short and chubby Irken, something that causes him to be looked down upon (both figuratively and literally) by the Tallest, and is considered “too short and ugly” by them.

He wears a standard Irken Invader uniform, but with no horizontal stripes, which has several dark spots or stains on it, and wears pink gloves and boots rather than the usual black, although these changed to the standard black in "Hobo 13".

Skoodge has shown that he can be very gullible, believing the Tallests' claim that they changed the tradition for Organic Sweep (the conquering Invader was launched from a cannon as part of the Organic Sweep as opposed to ordering the sweep to be commenced themselves).

He is nervous and seemingly afraid of the Tallest sometimes, choosing to be aware that Red and Purple despise him due to their cruel and uncaring height-based society, causing him to have a very mellow and kind personality.

As mentioned above, being the first to take over a planet for Operation Impending Doom II indicates that Skoodge is indeed a skilled Invader, but this is never acknowledged by anyone due to his minimal size.

Skoodge was the last one called during "The Great Assigning" by the Tallest, and he was given the mission to conquer planet Blorch, home of the Slaughtering Rat People. Blorch was originally assigned to Invader Larb, but as Larb had increased in height, he was assigned to the planet Vort, and Blorch was given to Skoodge due to his aforementioned shortness. Much to the surprise of the Almighty Tallest, Skoodge became the first Invader to successfully conquer a planet in Operation Impending Doom II.

However, not wanting such a short Invader to be “the poster boy of galactic conquest” in a society discriminated against height, the Almighty Tallest convinced the gullible Skoodge that it had now become customary to fire conquering Invaders from the main cannon before the Armada commenced the Organic Sweep on their assigned planet.

After the real Skoodge had been ejected onto the surface of Blorch, Tallest Purple selected a taller candidate, Invader Grapa, to receive the glory for Skoodge's work.

During the events shown in the cancelled/unfinished episode, "The Trial", Skoodge apparently went to school with Zim beneath Irk's surface. Zim hatched a plan to escape (which was against the rules), which Skoodge went along with, which resulted in them getting beaten up and expelled.

Skoodge survived being launched into Blorch, and went on to test with Zim on Hobo 13, hoping for a promotion (Zim was there seeking the same goal). When Zim expesses surprise that Skoodge is alive, Skoodge simply says that he's "okay now." Zim sacrificed Skoodge to the Hogulus during one of the trials in order to ensure his own safety, but, incredibly, Skoodge somehow survived again and made it to the Fortress of Pain, only to get dragged away once more by the Hogulus, this time with Sergeant Hobo 678 hitting him against the beast.

In the canceled/unfinished episode "Day of Da Spookies", it was said that Skoodge had been living in Zim's basement ever since he destroyed Blorch. He helped Zim in his plan to discredit Dib, which, like most of Zim's plans, failed. The plan involved Zim dressing up as a ghost along with Minimoose and GIR.

Zim seems to have some resentment towards the fact that Skoodge was able to conquer his assigned planet Blorch, while he hasn't been able to conquer Earth, and even seems to think Skoodge is rubbing his victory in his face when in actuality, Skoodge doesn't seem to be the gloating type, as he is more respectful and reserved. Zim has described Skoodge as "gullible" and has taken advantage of that fact, something that Skoodge either doesn't notice or chooses not to say anything about it, as he is aware how destructive Zim can be.

Despite the fact that Skoodge is not only the true Irken Invader but also the taller of the two, Zim treats him with callous cruelty and even nearly got him killed on "Hobo 13". Despite this, Skoodge has never showed any hatred towards the shorter Irken and in fact is most likely the only one in the Irken Empire to show the defective any type of respect (something Zim is unsurprisingly unaware of). Their friendship is almost always one-sided, as Zim has abused Skoodge both physically and verbally, but it should be noted that he never attempted to kick Skoodge out of his base once he found out he had been living in his basement, showing some small measure of kindness to his fellow Invader.

The relationship Skoodge has with his leaders can be described as derisive and cold at best and downright abusive at worst. He is openly hated and discriminated against for being "so short and ugly". This was highlighted in "The Nightmare Begins", where they assigned him to Blorch without any regard for his safety, and in actuality expected him to die at the hands of the Slaughtering Rat People.

It is heavily implied that any reports Skoodge might have given the Tallest on his mission were treated with contempt, as they were surprised that he not only succeeded in conquering the planet but was the first first Invader to do so. This however didn't win Skoodge his leaders' respect, as they discriminated him simply because of his height and instead chose to try and kill him and give another taller Invader the glory for his work.

Not much is known about Skoodge's relationships with the species he eventually conquered, but it is heavily implied he dreaded the thought of landing on their planet, as he was about to shed tears at the thought of his likely demise. Despite this, he survived for at least a year on Blorch, which hints that he at least was capable of communicating with them so at to not be eaten or killed by the rats. In an ironic twist of fate, he ended up being sent into the surface of Blorch and then most likely joined the conquered rats as they endured the Organic Sweep.

Skoodge was sent to Hobo 13 by the Tallest with the promise of a promotion if he passed his evaluation, unaware he was sent there to die. That's where he met his drill sergeant, Hobo 678, who from the start he showed respect to, although that might be due to his height rather than military rank.

Even though they hardly interacted, Hobo 678 was disgusted that Zim disregarded Skoodge's safety, as he believed that taking care of a squad was a sign of honor. There was some small hypocrisy on his part, as he used Skoodge as a means to get the Hogulus to let go of him but instead they were both dragged by the beast, presumably back to his cave to eat them, though Skoodge's and Hobo 678's later appearances in "Day of Da Spookies" and The Dookie Loop Horror respectively show that they survived. 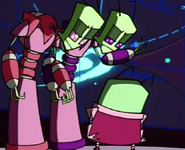 Could you be any shorter?

A Picture of Skoodge on Blorch seen in The Nightmare Begins.

Skoodge isn't too happy with his assignment.

Skoodge watching Zim interrupt the end of The Great Assigning.

And slowly inching away 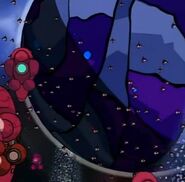 About to be launched as part of the Organic Sweep.

Skoodge being launched as part of the final cannon sweep. 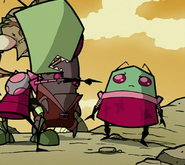 Claiming to be "all right"

Skoodge and other aliens on Hobo 13

A close up of Skoodge

Skoodge and Zim on Hobo 13. 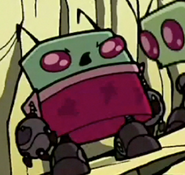 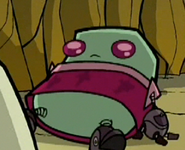 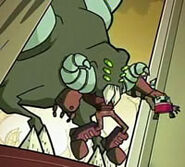 Skoodge in the background of the cover of Issue 10