Invader Tenn is an Irken Invader, assigned to the planet Meekrob, home to a race of mysterious and intelligent beings of pure energy who are sworn enemies of the Irken Empire.

During the episode "Megadoomer", the Almighty Tallest decided to send Tenn a Megadoomer X-3 Combat Stealth Mech to assist her in the infiltration of Meekrob.

Due to a rebellious postal slave named Smikka Smikka Smoodoo, Tenn was sent a pack of malfunctioning SIR Units instead, which proceeded to destroy her base, and almost certainly her cover. Meanwhile, the Megadoomer ended up being sent to Zim instead.

The Tallest were contacted by Tenn, who begged for help as the malfunctioning robots destroyed her base. However, Tallest Red and Tallest Purple did not care at all, were completely apathetic to Tenn’s pleas, and simply watched and ate snacks as they allowed Tenn’s base to be destroyed, along with her cover, resulting in ruining her mission and endangering the Invader. 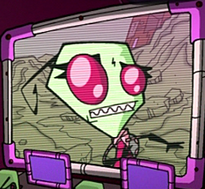 She is one of the few female Irken Invaders, and was seen in three different episodes, although her appearance differed slightly between them.

In "The Nightmare Begins" and "Battle of the Planets", she was one of the few invaders without spots on her PAK or stripes on her uniform. Her appearance in "Megadoomer", however, has her with spots and stripes.

She looks quite a bit like Zim, although female, and with brighter pinkish eyes. She also speaks in a nasally voice.

Not much is known about Tenn’s personality, but she had been panicking when her base was being destroyed by the malfunctioning SIR units, unable to do anything, this seems to suggest that despite her Invader status and military background Tenn is not fearless.

Invader Tenn made minor cameo appearances in "The Nightmare Begins" and "Battle of the Planets".

Her only official major role was in the episode "Megadoomer", in which it was made clear that she had been assigned to invade Planet Meekrob, but was inadvertently sent a box of malfunctioning SIR units, which destroyed her base and ruined her mission.

Tenn in "The Nightmare Begins"

Tenn in "Battle Of The Planets" amazed that Skoodge conquered Blorch.

Tenn's base destroyed, with only her videophone remaining just seconds before it too is blasted into spare parts.