NOTICE (9/4): @ZIMWiki on Twitter has been shut down. Thanks for the memories and following up on Enter the Florpus on there!

We currently have 879 articles about Earth's impending doom. 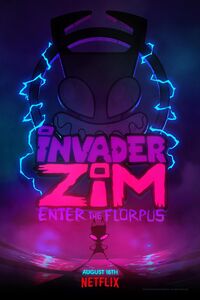 Invader Zim: Enter the Florpus has arrived on Netflix! The movie follows Zim, who suddenly reappears to begin Phase 2 of his evil alien plan to conquer Earth. His longtime nemesis Dib sets out to unmask him once and for all!

Many of the main voice actors returned to reprise their roles from the original series, including Richard Horvitz, Rikki Simons and Andy Berman! The show's creator, Jhonen Vasquez, also returned as an executive producer alongside Mary Harrington.

The movie has been a hit with fans and has them clamoring for a TV return for the series, especially after a 13 year wait since the last episode premiered!

What did you think of the movie? Join the Discussion!

Would you like to help Invader ZIM get back on air as a full fledged animated TV series again?

Then visit any or all of these links!

Zim is the titular main character of the Invader Zim franchise. An Invader of the Irken Empire, Zim is determined to conquer Earth at all costs in order to please his leaders, the Almighty Tallest. Unknown to Zim, however, his mission is actually an exile to keep him away from Operation Impending Doom II.

Go to these sites for info or for help with your own wiki!

Want your community included? See how!

Retrieved from "https://zim.fandom.com/wiki/Invader_ZIM_Wiki?oldid=88692"
Community content is available under CC-BY-SA unless otherwise noted.