Jessica is a popular blonde girl from Zim and Dib's Skool in Invader Zim. She is voiced by Antoinette Spolar.

Jessica is a blonde, pale-skinned girl whose height stands above several other students. She has two wide rectangular bangs covering her forehead. Her neck is also abnormally thin, she has a slightly rectangular head, and her eyes are not visible, concealed as they are by a perpetual squint (however, one scene of "The Voting of the Doomed" reveals her eye color as ocean blue). She wears wears a simple, sleeveless blue shirt and a dark blue skirt. Jessica also wears two brown earrings on her right ear.

In "The Voting of the Doomed", Jessica's appearance changes. While she still dons her old outfit, it is more complicated than before - she has a sleeveless blue turtleneck and a belt around her skirt that is unnaturally large to go around her torso. She now has three rectangular brown earrings on her left ear, her bangs sit on her temples and her hair is thicker as well as slightly shorter. She also has two small marks in between her eyes and her ears are now diagonally rectangular.

In Issue 19, her design borrows elements from both episodes that she appeared in during the TV series. Her neck is rounder again and she loses the belt and small marks between her eyes altogether. Her hair borrows season two's design for the top of the head and season one's thinner design at hair below her head. She also wears sleeves now. She loses her earrings too, but this is unknown as to if this a character redesign element since her first appearance has her with them.

Jessica represents the very archetype of "obnoxious popular girl": She is very condescending, and often refers to other students such as Dib and Zim as "weird" or "freaks". She hangs out with her other popular friends. She thinks of Gretchen, Keef, Melvin, Dirge, and Matthew P. Mathers III as "rejects", Zim as a loser and "inhuman" and Dib as the "creepy kid.". She also began to panic when her cell phone was stolen from Dib while in the middle of a conversation.

Jessica further expressed her derision when Keef invited everyone to Zim's lair for a surprise party, and she asked: "Who's Zim? Oh, you mean the freak? With that one friend that makes him even freakier?" and then laughed and said: "I don't think so."

Her biggest appearance was in "Bestest Friend". In that episode, she asked rhetorically what kind of person has no friends ("It's so inhuman!"), which caused Zim to seek out a friend in fear of being discovered. Later in the episode, when Zim and Keef began being friends, Zim introduced Keef to the popular kids, so that they would be fully aware that he now had a "best friend." She told them to get lost. Later, she rejected Keef's invitation to Zim's "party" after becoming aware of where the party was going to be celebrated.

In "A Room with a Moose" she's seen in the skool bus with the other skoolchildren who Zim trick to meet a "Moosey fate" despite not being a member of Ms. Bitters classroom.

In "the Voting of the Doomed", Jessica's phone was stolen by Dib while Zim was making his speech; she suffered what appeared to be a nervous breakdown upon being parted from her precious device. Later, Jessica voted for the Skool President.

In Issue 19 of the comic series, Jessica is one of the students who visit the fake zoo operated by Zim's Roboparents. She is disgusted and disappointed by the fake animals on display, and along with the other students, accuses Zim's parents of being grifters.

In Issue 26 Jessica makes another appearance as one of the skoolchildren that GIR befriends, though he seems to take offense to her insulting Zim. She is again shown in Ms. Bitters' class. 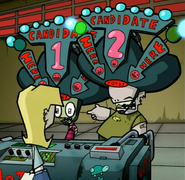 Add a photo to this gallery
Retrieved from "https://zim.fandom.com/wiki/Jessica?oldid=82807"
Community content is available under CC-BY-SA unless otherwise noted.