Johnny C, also known as "Nny" (pronounced "knee"), is the protagonist of Jhonen Vasquez's first comic, Johnny the Homicidal Maniac, who makes cameo appearances in the rest of his work.

Nny is a deranged serial killer, mass murderer, and spree killer who interacts with various other characters, generally by murdering or torturing them. He elaborately kills anyone who even slightly irritates him, then drains their blood and paints a certain wall in the bowels of his house with it "to keep the Thing from behind the wall from getting out."

Johnny is willing to murder "innocent" people who, in his twisted mind, deserve their fate for some reason or another (many of those reasons are the reinforcement of stereotypes and enthrallment to the rampant consumerism of Vasquez's world). The number of Johnny's victims is in the dozens, if not hundreds — or perhaps even thousands.

Authorities are unable to capture Johnny and seem unaware of his existence, even though his crimes are often witnessed in public and reported by the few who manage to survive. Johnny himself speculates on this being the result of interference from outside forces.

However, in spite of his killing sprees, Johnny had, and perhaps still has, romantic feelings for a woman named Devi D, who is the heroine of Vasquez's double-shot comic I Feel Sick (revealing that Jhonen has put a romantic relationship into one of his works in spite of his claims that he isn't the romantic type). She's also the only person (besides Squee) Johnny has ever truly felt any positive feelings for.

They met in the bookstore she once worked in before she became a professional artist, and went on a date that ended in almost being able to kiss, but instead, Johnny felt so happy that he wanted to "immortalize the moment" and attacked Devi. Instead, she beat him up and fled. Ever since, he has been occasionally trying to contact her to apologize and try and explain his odd reasons for trying to kill her, in which she responds to by locking herself in her apartment and screaming at him over the phone.

Johnny seems to show selflessness and great care toward her by trying to become cold so he has a lesser chance of killing her again. In the final issue, he kills the Psycho Doughboys in retribution for ruining his chances at a relationship with Devi, as a result.

Johnny is somewhat of an insomniac, and would attempt to rid himself of all feeling. Johnny C expresses his emotions through his mass killings, but killing mostly is used in a comedic sense, as Johnny is not devoid of feeling or morals. In fact, during one conversation with a prisoner named Tess, she assumes he (Johnny) is the person behind a recent murder in which a girl was raped before she was killed. Johnny vehemently denies being involved, saying "I would never!".

Later, when Johnny meets the young man who actually did it (in an attempt to be more like Johnny, whom he idolizes), Johnny brutally murders him, saying "And though this gets me no absolution, I would never do what you did to that girl!". 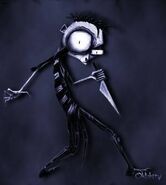 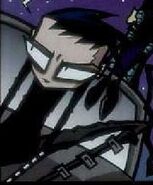 Nny as he appears in "I Feel Sick."