MiMi is an upgraded SIR Unit that belongs to Tak. Built out of scrap on the planet Dirt, MiMi is more advanced than other Invaders' SIR units, and is more capable than most others as well. In her disguised form, she resembles a lithe black cat with long, grey segmented ears, a crescent-shaped tail, and gleaming red eyes.

Despite her upgrades, however, MiMi still proved to be vulnerable when Gaz doused her with Poop Cola. MiMi's memory disk fell out as she fled, which contained the data that allowed Zim, GIR, Dib, and Gaz to foil Tak's plan.

At the end of "Tak: The Hideous New Girl", GIR and Gaz used this memory disk to take remote control of MiMi's brain, and, with the deranged GIR acting as the puppeteer, made Tak's SIR wreak havoc on the would-be Invader's ship, hindering her plan.

It appears that Tak was forced to dismantle her robot in order to regain control, as MiMi's parts were seen floating in the cockpit of her escape pod after the battle.

"Tak: The Hideous New Girl" was the only appearance MiMi made in the series, although she would have reappeared beside Tak in "Top of the Line".

MiMi is incredibly strong, agile, and shockingly fast; frequently appearing as a streak of dark blue. However, since her feline disguise is activated by a holographic projector, this can only be done in cat form. Without her disguise, MiMi has a large, extendable claw that replaces her right arm, which she once used with great power to hurl GIR into the Voot Cruiser.

Unlike normal SIR Units, MiMi seems to be incapable of speech. However, she did make sounds parroting GIR's voice when he was remotely controlling her.

It is possible that MiMi can send out shockwaves, seen as she spun in Zim's front lawn, decapitating Zim's lawn gnomes (and GIR). However, she was moving so fast during this moment, she may have simply severed the gnomes with her claw.

Like other SIR units, she appears to be able to store things in her head, as she unleashed a swarm of micro-explosives from it to destroy Zim's base.

Being a robot, MiMi technically has no gender; but from what the show has revealed, SIR Units are typically 'given' genders by their masters. 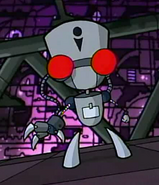 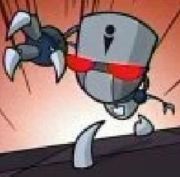 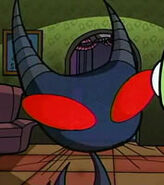 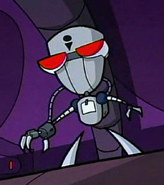