Mr. Dwicky was the most recent individual to hold the position of Skool counselor, replacing the old one after "something horrible" happened to him. His first and only major role was in "Vindicated!", in which he teamed up with Dib (who was sent to his office by Coach Walrus) to capture Zim.

Mr. Dwicky initially pretended to believe Dib when the boy said that Zim is an alien. Dib got excited, thinking that he finally had someone to share his discoveries with.

Unbeknownst to Dib, however, Mr. Dwicky was only pretending so he could find out Dib's "real" problem; he had stopped believing in aliens when he got his foot caught in an escalator as a kid, and aliens didn't come to save him.

When Dib discovered Dwicky's well-intentioned duplicity, he was devastated, and stated, "That's my problem right there! My problem is that the human race seems to want to be destroyed!"

However, Zim fortunately chose this point to show up before their very eyes, and Dwicky was shocked to discover that everything Dib said was true after all, and not the result of delusional behavior. Later, when two other aliens showed up (known as Plookesians), Dwicky gladly joined them in their spaceship.

Unfortunately, he took with him the only proof of extraterrestrial life: the video camera Dib brought with him. It is unknown how the Skool reacted after realizing Mr. Dwicky was gone.

Like Mr. Elliot, Mr. Dwicky has a very cheerful personality and appears to be very kind, though his cheerfulness has an undertone of insanity to it. 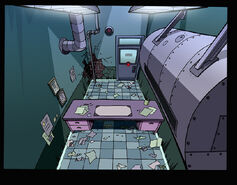 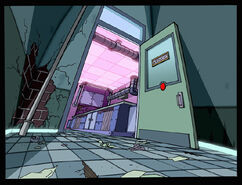 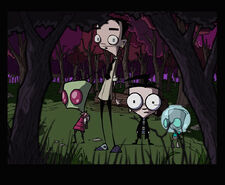 (from left to right) Zim, Dwicky, Dib and GIR.
Community content is available under CC-BY-SA unless otherwise noted.
Advertisement