Nicktoons MLB is a 2011 baseball-themed Nickelodeon video game that was released on September 13, 2011 on the Wii, X-Box 360, and Nintendo DS and was later released on the Nintendo 3DS on March 6, 2012. The game has playable characters from shows like SpongeBob SquarePants, Avatar: The Last Airbender, Danny Phantom, Fanboy and Chum Chum, T.U.F.F. puppy,  Invader Zim, some more Nickelodeon shows, as well as real-life baseball players from real baseball leagues.

The playable characters from Invader Zim are Zim and Gaz Membrane, though it is unclear as to why they (or any other character, for that matter) partnered together because there is no story mode; additionally, one of the playable arenas resembles Foodcourtia, with several Irkens in the stands, and is simply referred to as the "Irken Field". Finally, GIR (alongside Perch Perkins from SpongeBob SquarePants) is an announcer host. The rest of the characters, like Dib Membrane, the Almighty Tallest, Sizz-Lorr, and Ms. Bitters, are not playable at all in the game but instead appear on cards that you can unlock by completing certain objectives in the game; in addition, Dib, Chickenfoot, and Professor Membrane can be seen in stadium seats in the background when Appa, Aang's flying bison from Avatar: The Last Airbender takes up most of the stadium seats on loading screens, but they don't say a word in the game. Zim, GIR, and Gaz are voiced by their respective voice actors from the cartoon. Several lines from certain episodes are deliberately altered in the game during strikeouts, turbo hit activation and home runs (e.g. "The rightful order has been restored. " is now "The rightful balance has been restored".

It is interesting to note that when Zim bats his strongest hit (knocking the ball out of the park), the Irkens in the stands cheer for Zim (Gaz, too, if she is in the first base position, as well as any other character). This is a bit surprising, considering that he is hated by most of his own kind on the actual show, but he is still very loyal to his world (however, on the show, canonically the Irkens have cheered for Zim twice; once in "Battle of the Planets" and again in "Hobo 13"). It can be interpreted that the Irkens really want to prove themselves superior in the current baseball season (as mentioned on the aforementioned cards), and so have decided to allow Zim a chance to once again prove his worth to his own people.[1] When the ball is knocked out of the park, it flies toward a column that rises near the stands; when the ball hits the column, it shoots purple sparks before descending again.

Nicktoons MLB, being a non-canon game, features no storyline unlike the other games. It is more of a compilation of elements in various Nickelodeon series, giving fans the opportunity to play as almost every character in each cartoon, old and new alike. There also is very little character-specific interaction, at least in the fields; there is some in the announcer's booth with GIR and Perch, a small bit with Zim and Perch when he silences Perch after Perch says something that harms Zim's narcissistic self-image, and Gaz cheering for Zim when he hits a home run.

Zim is a playable character in the game. He is best used as a first baseman. His win pose is a jump of excitement with a big, gleaming smile. His quote is "Silence, announcer man; silence while I bat!", homaging one of his catchphrases, as well as expressing annoyance at the announcer's disruption of his concentration. He has a few extra lines as well, and his character rendering is an improvement from the other games, now having his correct head and eye shape as well as having his Irken PAK.

Zim's "up to bat" pose before assuming his batting position is a dramatic, action movie-esque jump.

Gaz is another playable character. She is best used as a pitcher, with her throw being the most powerful, leaving a trail of skulls in the design of her necklace. Her win pose is a simple, indifferent shrug (while her face has a look of satisfaction) before walking back to the dugout. Her saying is a simple "Whatever", though she has another line when the turbo hit is activated, another when she gets a home run, and when she is batting and running around the bases she compares the whole experience to a video game. She also cheers for Zim when he gets a home run too (both have to be first-basers on both teams). Her clothing is the same as in the show, only her dress has pinstripes and she wears a baseball cap that transforms into a baseman's helmet. Additionally, her head has the rounded look from Season 1 rather than the updated angular look from the second season.

Gaz's "up to bat" pose before assuming her batting position is just walking up to first base.

GIR is not a playable character, but he is an announcer along with Perch Perkins from SpongeBob SquarePants. Just like on the actual show, he often makes random quotes after important information or game commentary from Perch Perkins, some examples are "Hooray for cheese!" and "I wanna watch the angry monkey show." Oddly, Zim or Gaz don't seem to notice GIR is up in the announcer's booth with Perch.

The Irken Field is described on its own card as state-of-the-art and is said to have really tall drinking fountains with no step-stools. In the in-stadium food court, there is a Shloogorgh's Flavor Monster restaurant where customers can watch the games while they eat. (Sizz-Lorr's card reveals he wants to franchise it in every stadium, in fact, because he acquired a food vendor's license.) In addition, there is also an advertisement for a Bloaty's Pizza Hog in the Irken field as well, and there is also a Grub Demon restaurant there too.

As playable characters in the game, Zim and Gaz have very limited but surprisingly positive interaction, unlike most of their interactions on the show. One most noticeable interaction is in the console version, when the challengers have Gaz as a first baser, and you have ZIM on your team and make him hit a home run, Gaz can be seen cheering for ZIM during the short time when he passes first base during the run. They seem to work rather well together in the game overall.

Nicktoons MLB has received mixed reviews from critics and gamers. Operation Sports gave the game 4 out of 10, stating, "As it is, you should only buy this for the Nickelodeon characters or if you are dying to play a Kinect baseball game. Otherwise, just treat yourself and your kids to The Bigs 2, a game with more polish and much more to do. Then, when you are done, watch SpongeBob." Official Xbox Magazine gave the game a score of 6.5 out of 10, saying, "Nicktoons MLB is fun, but frivolous, which should work just fine for kids and families." They also both praised and criticized the usage of Kinect, saying "having your arm angle determine the pitch type is downright genius — though sadly, occasional gaffes (such as seeing swings you didn’t take) muddle the execution.

However, there have been some positive reviews as well. 123Kinect said "If you are buying this for yourself and are older it's probably around a 6/10, you will notice the flaws, which is why I rated it at 7, it’s one of those on the fence titles. It's by far no means a real MLB title, however it’s a step in the right direction." Anime Courtyard also gave it a 7 out of 10, stating "At the end we can say that Nicktoons MLB is not spectacular but not a bad option if you want a baseball game without complications. For children, a good game if they like the Nicktoons. And of course for a grown up who wants a trip to memory lane with their favorite Nickelodeon characters."[6] Nintendo World Report's review gave the game an 8 out of ten, concluding with "Nicktoons MLB is a simplified but very fun baseball game. Don’t let the kid-focused presentation scare you off; this game is worth a look from anyone in the mood for an arcade baseball game."

The Tallest making cameo appearances on the Loading Screen.

Dib, Chickenfoot, and Professor Membrane making cameo appearances on the Loading Screen behind Appa from Avatar: The Last Airbender.

GIR and his Pig making appearances on the Loading Screen. 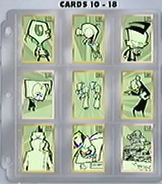 Zim's Card. Description: "INVADER ZIM was almost cut from the team for unsportsmanlike conduct. He has promised to stop tying team members' shoelaces together."

GIR's Card. Description: "GIR's contract negotiation for the color man position was said to be "one of the most out-of-this-world ever," according to the broadcast company. GIR, when asked to comment, replied "I WON ALL THE SQUISHY TACO SOUP!""

Dib's Card. Description: "Dib only recently returned to team sports after a required stint on the DL for "physiological screening." Apparently, he confided to reporters that aliens had infiltrated the game."

Almighty Tallest's Card. Description: "THE ALMIGHTY TALLEST look forward to the upcoming season, claiming that the outfield wall in IRKEN FIELD will be taller than anything else in the sniveling, putrid universe."

Ms. Bitters' Card. Description: "Ms. Bitters, reached for a quote, said: "You are a useless pile of soon-to-be dead flesh that has been saddled with an intellect so subhuman that I feel it may be my social duty to aid your internal organs in a revolt against your continued existence." She'll be a cheerleader for the upcoming season."

Professor Membrane's Card. Description: Professor Membrane recently applauded Major League Baseball for continued use of wood and leather in the game, stating that a recent study showed a 91.3% chance that wooden cows would rise in revolt against mankind. The league responded that it is always happy to provide a chic benefit.

Fry-Lord Sizz-Lorr's Card. Description: FRY LORD SIZZ-LORR has recently been given a food vendor's license and plans to open a Schloogorgh's in every stadium. He promises the most dominating menu in all of baseball!

Retrieved from "https://zim.fandom.com/wiki/Nicktoons_MLB?oldid=92691"
Community content is available under CC-BY-SA unless otherwise noted.