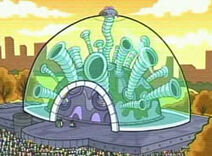 The Perpetual Energy Generator (abbreviated as "PEG"), was one of Professor Membrane's many inventions. It only appeared in "Future Dib".

Membrane's purpose in developing PEG was to create a source of energy that did not require fuel to continue working - in other words, it would continue to produce energy without any resources required to power it, effectively eliminating the energy crisis on Earth.

Whether it would have worked or not is unknown, as on the day of presentation, Membrane spent hours waiting for his kids to show up, when (unbeknownst to the professor) they were busy fighting a robotic duplicate of Dib controlled by Zim. Eventually, the crowd got tired of waiting, and, irritated with their behavior, Membrane shut down the PEG before it could activate.

It is worthy of note that this ranks among the most revolutionary of Membrane's many inventions, but also among the most dangerous: if it failed, it would have unleashed an enormous wave of destructive energy that would wipe out all life on Earth.

Retrieved from "https://zim.fandom.com/wiki/Perpetual_Energy_Generator?oldid=85892"
Community content is available under CC-BY-SA unless otherwise noted.