Planet Jackers are an alien race featured in the episode of the same name. Due to the fact that their planet's star is dying, they steal or "jack" (hence their name) other planets and throw them into the star like "firewood", as Zim put it. They thus are responsible for the mass genocides of several interplanetary species. They were shown to have advanced planet-moving technology.

Planet Jackers have red tongues and saliva that appears to be of a normal hue, although since they are always seen with small tubes entering their mouths that resemble dental rinse tubes on Earth, it could be that they must constantly keep themselves hydrated and this "saliva" is in fact the fluid they douse their mouths with. Larger Jackers seem to require more hydration, although this could also be a personal preference.

Their race are not above cybernetic enhancement and while they naturally possess three fingers and an opposable thumb on each hand, their cybernetic replacement hands instead only possess two finger-like appendages.

Judging by the two seen in their species' sole appearance, Planet Jacker skin can range from an asparagus color to a more pine green hue. Their eyes seem to be consistently green-yellow. Ironically, despite being fully green themselves, they still referred to Zim upon encountering him as "that green guy".

The Planet Jackers have a treaty with the Irken Empire; this would make them one of the few races that the Irkens are not directly trying to conquer, possibly due to the threat from their advanced planet-jacking technology. The treaty restricts the Planet Jackers from jacking planets marked for Irken conquest.

How Planet Jackers feed their star.

A pair of Planet Jackers.

A Planet Jacker in profile.

The tongue, teeth and saliva of a Jacker.

A Jacker OMS in extended mode.

A coupling keyhole, where a planetary shell is locked or unlocked.

A coupling key, used to lock and unlock a planetary shell.

A Jacker mask when not in use.

A Jacker mask in use to survive in space.

A Jacker shell from the inside, with its strange yet revealing "warping effect" on the sky.

A closeup of a damaged panel of a planetary shell.

A Jacker shell from the inside, showing screen grids and damaged panel.

An exit port leading from the inside of a planetary shell to the outside.

The innards of a Jacker planetary shell.

The outside of a Jacker planetary shell.

A hologram of the entire outside of a planetary shell.

A hologram of the forward section of a planetary shell.

A hologram of part of a planetary shell's pull cables and tug.

A hologram of a Jacker planetary shell tug. 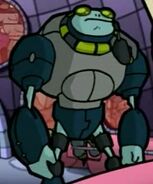 A Planet Jacker on Foodcourtia.
Community content is available under CC-BY-SA unless otherwise noted.
Advertisement