Roboparents Gone Wild was a cancelled episode of Invader Zim. The recording is available on the Invader Zim DVD.

When Zim's Roboparents go crazy from a power surge and begin to act somewhat like real parents, they kick Zim out of his base because he is "naughty". The RoboParents' replace Zim with a monkey/badger hybrid called Dinky, which they abducted from a local zoo.

Cast from his home, Zim eventually winds up in a boxcar with a filthy hobo, who gives him advice on how to get his base back. Taking his advice, Zim disguises himself as Dinky by wearing the hobo's beard. He returns home, finding his base totally ruined. He convinces the Roboparents that he is Dinky by randomly throwing/chewing sharp metal and tricks them into giving him a hug, and fixes them.

The voice recordings for the episode 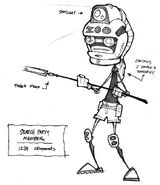