He is the inventor of the Subquantum Wormtunnel, which can send any object to Invaders at any time. However, he has not managed to work the kinks out of the Wormtunnel's prototype, and so Invaders cannot send objects back, or else it will cause half of the universe to explode.

Unfortunately, after Zim sent the "Munchitronic Deathskrang" (actually a thrown out snack that he was tricked into thinking was a weapon) back to the Almighty Tallest, half of the universe exploded.

As a result of this, Skrang's fate remains unknown, though the effects of this cataclysmic incident may be rendered impermanent by Invader Zim's loose continuity. 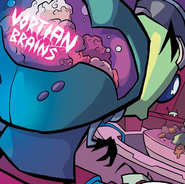