The Star Donkey is a powerful entity that appears in Issue 3 of the Invader Zim comic series.

Primarily worshipped by the Horkans, legends of the Star Donkey exist throughout the galaxy. Known as the "Four-Legged Kicker of Life" and "Space-Cleansing Nightmare Mule", it exists in a dimension of pure mulishness and can only be summoned by opening a portal. Some say that Earth donkeys are merely a manifestation of its "primordial donkishness" that ripples across time and space.

In order to summon the Star Donkey, six temples first need to be built. These represent its body parts: four legs, one head, and one bottom. The final step requires putting the Great Crystal Sugar Cube Mayruvia into its mouth, focusing the power of all six temples to open the gateway to the Star Donkey dimension. Once summoned, it will kick all life off of the planet from which it was summoned.

The Star Donkey is responsible for the extinction of the Horkans. Zim discovers the abandoned Horkan ruins in issue 3, and planned on using the information to destroy all humans on Earth. Once summoned, the Star Donkey kicked the Earth (and Zim) into the sun. 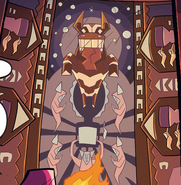 The result of the Star Donkey visiting Horkus 6

GIR reciting the tale of the Star Donkey

One of the altars to summon the Star Donkey
Add a photo to this gallery
Retrieved from "https://zim.fandom.com/wiki/Star_Donkey?oldid=81277"
Community content is available under CC-BY-SA unless otherwise noted.