The Frycook What Came from All That Space

"The Frycook What Came from All That Space" is the 6th episode of the second season of Invader Zim. It first premiered on December 27, 2003 in Australia. In the United States, it was first released as part of the Horrible Holiday Cheer DVD on October 12, 2004 and it made its TV debut on Nicktoons on August 19, 2006. It is the 26th episode overall.

While in Skool, Dib fails at an another attempt to prove to the class that Zim is an alien. Suddenly, a mysterious figure bursts through the ceiling, kidnaps Zim, and takes him into space. Dib attempts to reason this as proof to alien life, but his classmates only respond with laughter when Poonchy points out that bird excrement has landed on Dib's jacket.

Meanwhile, Zim is brought aboard his captor's ship, who reveals himself as Sizz-Lorr, a Frylord who was in charge of taking care of Zim during his banishment on Foodcourtia. When Zim escaped to attend The Great Assigning, Sizz-Lorr was trapped alone in his restaurant, Shloogorgh's Flavor Monster, for twenty years during The Great Foodening (though the time that passed for the rest of the universe was much shorter). After it ended, the Frylord vowed to find Zim and get retirubution.

Zim manages to contact GIR and orders him to call the Tallest; instead, he randomly runs outside with a monkey-shaped kite, meanwhile now that Sizz-Lorr has Zim in his greasy clutches again, he gives Zim a "surprise", which is to clean up Booth 12, which houses an alien carnivorous beast. Also, to ensure that Zim won't escape a second time, Sizz-Lorr reveals that he has equipped the restaurant with a special security system that will recognize Zim's Bio-Signature and make him explode if he attempts to leave the building. Adding to his horror, Zim finds out that in one week the Foodening will begin again, leaving him trapped for twenty years just like Sizz-Lorr endured.

Back on Earth, GIR is at the house alone and is visited by Dib, who asks where Zim has gone for three days. GIR remembers that Zim told him to call the Tallest, and does so while Dib watches. Meanwhile, for his first day back at his banishment, Zim is immediately put to work doing all kinds of horrible and demeaning jobs until he's eventually ordered to entertain the customers in a suit filled with "white hot grease."

Zim meets Eric the Blob. As they talk, Zim directs Eric's attention to the security system at the front door: the Blob identifies it as a Vortian 'Splodey System, and casually recalls that he had once worked on installing them until they were discontinued because of their one flaw: they won't recognize escaping prisoners if they "surround themselves with enough thickness" - the prisoners escaped by hiding in garbage cans. After a brief moment of silence, this eventually gives Zim an idea.

The next day, Eric comes in the restaurant as he does every day. But when he orders, Zim hides himself in Eric's food. When Eric eats it, Zim goes into his stomach along with it. Zim escapes from Schloogorgh's because Eric's body is thick enough to hide Zim from the security system. Unfortunately, Sizz-Lorr realizes his escape the second he makes it out the door. A long chase ensues, but Zim gets away in a Snacky Cabs taxi just as the next Foodening begins, leaving Sizz-Lorr stuck on Foodcourtia again.

Zim of course flies back to Earth, more than ready to return to his "mission" gloating to Sizz-lorr to "enjoy his defeat" back on Foodcourtia the Snacky Cabs announcer says that any cabs not docked will explode "For no apparent reason", thus as the taxi is flying past Saturn, it explodes and crash lands into the front yard of Zim's house.

Two human neighbors witness this, but nonetheless accept Zim's claim that it's normal. Happy to be back home, Zim congratulates himself only to find both Dib and GIR dancing in front of the Tallest in his living room. As Zim chases Dib through his house, the Tallest nonchalantly turn off the screen. 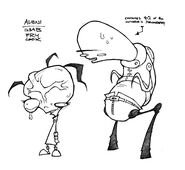 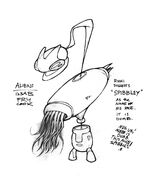 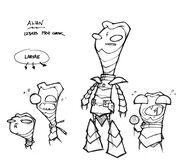