The Resisty's Ship was a large Vortian-designed spaceship that was piloted by the Resisty, an organization created to overthrow the Irken Empire. If the vessel had a name, it was never mentioned in script. It is seen only in the episode "Backseat Drivers From Beyond the Stars".

It was presumed to be one of the last Vortian starships when it appeared in “Backseat Drivers from Beyond the Stars”. Tallest Purple noted that he didn’t know any were left, and was surprised by its presence.

The Resisty's ship was large, almost as large as the Irken flagship, the Massive, and in fact both ships are Vortian designed, though there are many differences between the two. In stark contrast to Irken ships, the Resisty's ship had a pale grey and blue color scheme, and incorporated many straight lines and sharp edges.

As the Resisty's ship was developed by Vortians and for use by Vortians, it is likely much more representative of Vortian aesthetics than the Massive, despite both having the same design origins.

On the side of the ship near the back, there is presumably what is the Resisty's logo. It appears several other times on control panels in the command room.

Commanded by the Resisty's Leader, the Vortian Lard Nar, the ship set out for the group's first true act of resistance - attacking the Massive's side pods, which are filled with snacks, so that they may "feed the growing resistance." Just before the Resisty was about to be blown up, the Massive was majorly handicapped when its power core was taken over remotely by Zim, who began erratically piloting the Massive from his base on Earth.

The Resisty saw its chance and attacked, chasing the Massive through space, shooting the warship with lasers and even burning "Resisty Rocks!" into its hull. This chase ended with the Massive beaming their hijacked power core into the Resisty's ship, sending the Resisty careening. Seeing as they were about to crash into Earth, Lard Nar then ordered everyone to abandon ship as he activated the Shrinky Self Destruct.

The ship was armed with lasers, two on the front of each wingtip, and one large cannon below the back of the ship. The large cannon was controlled by Resisty member Shloonktapooxis.

The lasers proved to not be very effective against the Massive, as they were only able to put small punctures on its surface, as well as burn "Resisty Rocks!" into its hull, which was later simply scrubbed off.

In the event of an emergency, the ship carries many escape pods, which are released by the opening of the ship's side bay doors, located on the outside of either wing.

The ship also has a self destruct option, called "Shrinky Self Destruct." When activated, the ship will shrink to about the size of a housefly before exploding. The shrinking ensures minimal damage to the crash site, as well as prevents enemies from stealing the ship's technology and using it to their advantage.

When the Resisty's ship was transferred a faulty power core from the Massive, Lard Nar initiated Shrinky Self Destruct, and every member of the Resisty successfully escaped in escape pods. 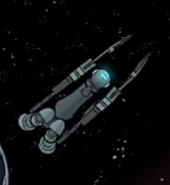 central control panel activating "Shrinky Self Destruct," logo depicted with text
Add a photo to this gallery
Retrieved from "https://zim.fandom.com/wiki/The_Resisty%27s_Ship?oldid=89113"
Community content is available under CC-BY-SA unless otherwise noted.