"Vindicated!" is the 1st segment in the 4th episode of the second season of Invader Zim. It first premiered on December 21, 2003 in Australia. In the United States, it was first released as part of the Horrible Holiday Cheer DVD on October 12, 2004 and it made its TV debut on Nicktoons on July 22, 2006.

One day, during Gym class, Dib and Zim find themselves pitted against each other in a game of Bludgeonball, a sport similar to dodgeball. During the match, one of Zim's contact lenses falls out. All of the Skoolchildren immediately notice, but Zim passes it off as pink-eye, "a normal human illness".

Dib gets upset like he always does whenever people fall for Zim's lies, but this time, it's worse than usual, with Dib basically throwing a temper tantrum in front of everyone. Because of his outburst, the gym teacher, Coach Walrus, sends him to Mr. Dwicky, the new guidance counsellor (as something horrible happened to the Old Skool Counselor).

Mr. Dwicky asks Dib what the problem is, so, he tells the guidance counselor everything about Zim and how nobody believes he's secretly an alien. Surprisingly, Mr. Dwicky believes Dib, and he even wants to work with him. After Skool at Dib's house, Mr. Dwicky and Dib create a plan to expose Zim. Using schematics for an alien identification transmitter stolen from Zim's Computer, they call Zim's Base claiming to be Plookesians that crash-landed on Earth. Dib, with his voice disguised, makes a deal with Zim. If the alien agrees to fix their ship, he and Mr. Dwicky (his voice also disguised) will give Zim some super-weapons.

All three of them settle on a meeting point somewhere in the woods, and Dib and Mr. Dwicky set up cameras at the site they set for the trick. But after waiting for hours with no sign of Zim showing up, Mr. Dwicky tells Dib to stop pretending and tell him the real problem. Dib gets upset when he realizes Mr. Dwicky was just playing along, but his disappointment fades quickly when Zim shows up. Mr. Dwicky is in shock for the next few minutes, but Dib and Zim start another argument right away. Dib reveals to Zim that the whole thing was a trick that he and Mr. Dwicky had set up, but Zim doesn't believe him.

Before anything else can happen, real Plookesians show up. They'd been tracking the Plookesian signal Dwicky and Dib were sending, and they came to check it out. Zim demands the Plookesians give him super-weapons, as he still didn't realize that Dib tricked him. Much to Dib's consternation, the Plookesians readily comply with Zim's demand, and then they leave with Dwicky (and, unfortunately, the video camera), whom they invited to come along with them. Dib is left without an ally or proof, and Zim goes home with a huge pile of super-weapons, but still no clue that Dib had arranged everything.

Dib yells "no" in slow motion, as the screen goes black. 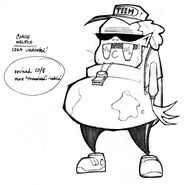 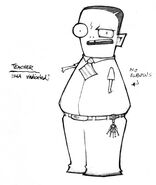 Retrieved from "https://zim.fandom.com/wiki/Vindicated!?oldid=87044"
Community content is available under CC-BY-SA unless otherwise noted.